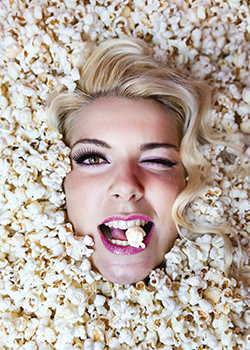 Her name is Marina. She was born in Barcelona in 1990.

She works as a freelance and collaborates with various studios with all kinds of projects; packaging, marketing, branding, illustration, etc. In 2015 she began to collaborate with Bau in the monitoring of final degree projects and currently teaches in several of the project classes.

After being awarded the 2018 Crema Award at the Blanc Festival, she received the talent belt awarded to the best emerging design studio. And the possibility of continuing to train with a Master in PostGraphics.

Collaboration channels are also being opened with various institutions or organizations such as: Encants Barcelona, ​​Poblenou Urban District (WAC), …

It is minimalistly baroque and somewhat kitch. You place a lot of importance on personal work, as this is where you can research and experiment with new techniques and graphic languages. That is why it is always open to new challenges. She loves participating in art and design competitions so she can develop creativity exercises and train her blonde neurons. It is characterized by having a very marked personal style but at the same time, by knowing how to adapt to the needs of the clients in each new project that it undertakes.

She likes to look at old photos, she loves sushi, wraps gifts, she also sings in the shower and if her knee hurts, it’s going to rain.

Collection of handbags and accessories made by hand, to measure and to order. You can propose the measures, food, shape, colors and flavors you want.

Ideal because they do not get fat and feel scared. Very light, with inner lining and as much space as in the Mary Poppins bag.

With gold or silver chain included and removable.

We use cookies on our website to give you the most relevant experience by remembering your preferences and repeat visits. By clicking “Accept All”, you consent to the use of ALL the cookies. However, you may visit "Cookie Settings" to provide a controlled consent.
Cookie SettingsAccept All
Manage consent

This website uses cookies to improve your experience while you navigate through the website. Out of these, the cookies that are categorized as necessary are stored on your browser as they are essential for the working of basic functionalities of the website. We also use third-party cookies that help us analyze and understand how you use this website. These cookies will be stored in your browser only with your consent. You also have the option to opt-out of these cookies. But opting out of some of these cookies may affect your browsing experience.
Necessary Always Enabled
Necessary cookies are absolutely essential for the website to function properly. These cookies ensure basic functionalities and security features of the website, anonymously.
Functional
Functional cookies help to perform certain functionalities like sharing the content of the website on social media platforms, collect feedbacks, and other third-party features.
Performance
Performance cookies are used to understand and analyze the key performance indexes of the website which helps in delivering a better user experience for the visitors.
Analytics
Analytical cookies are used to understand how visitors interact with the website. These cookies help provide information on metrics the number of visitors, bounce rate, traffic source, etc.
Advertisement
Advertisement cookies are used to provide visitors with relevant ads and marketing campaigns. These cookies track visitors across websites and collect information to provide customized ads.
Others
Other uncategorized cookies are those that are being analyzed and have not been classified into a category as yet.
SAVE & ACCEPT
Powered by