Manuel Valls Vergés was born in Barcelona on 3 February, 1912. His father was a doctor and he originally wanted to be one too but in 1929, as a first-year student in the school of medicine, he visited the Barcelona International Expo and saw the Mies Van der Rohe pavilion: “Upon seeing the new materials and the beautiful things that could be made”, he decided to become an architect.

He received his degree in architecture in 1940. A year later, he set up his studio with Jose Antonio Coderch. This partnership would last until the 60s, as they became part of the “first post-war generation”. His initial architectural phase was characterised primarily by constructing small, single-family homes on the coast of Catalonia. The simple shapes and whitewashed walls would reach their ultimate expression in the Ugalde House, near Barcelona, in 1951. This construction of extreme simplicity is one of the most admired works of Spanish architecture from the past fifty years. For Manuel Valls Vergés, luxury came through the quality of the construction “We were in the same year as Coderch in university. Then we received our degrees, and once you get that, you have to find an office, a telephone, table, pencil and paper and look for clients. Plus, with Coderch, we got to be good friends. He was an upstanding individual and he did good work. We got on”.

In 1960 he received the FAD Architecture Prize and began teaching at the Barcelona School of Architecture.

“The thrill of being a professor at an architecture school lies in getting a dose of vitality and a desire to do things from so many students, because you’re not at a meeting of alumni, and that’s nice, right? And the experience that we had we could pass on to our students. The course I had involved doing projects, they had to check material strengths, the location, terrain, orientation, type of dwelling…”

In 1982 he received the Gold Medal from the C.O.A.C. (Catalan Society of Architects), and in 2000 he passed away. He is buried in the cemetery of Arenys de Mar, where he had been the town architect for 23 years.

Foremost among his works with Jose Antonio Coderch are the following:

At Marset, we’re convinced that we do more than lamps. We take care of light and its various nuances and effects to improve people’s quality of life.

Design is what sets us apart at Marset, and that’s where our vocation for good design was born: to make a product with the utmost rigor and innovation that generates a beautiful light and that can surprise, thrill and endure, so that we can contribute our bit to a more sustainable world.

The MVV story begins in the 1970s. This new suspension lamp is a first, and was designed by Manuel Valls Vergés, one of Spain’s most notable architects at the time and partner of Jose Antonio Coderch for 15 years, alongside whom he undertook such prominent projects as the Ugalde house, near Barcelona. The MVV name reflects Vergés’ initials, as a way of displaying his authorship of this unique lamp. That was the desire of his grandson, also an architect, and of his partners in the Two-bo studio. Pablo, María and Alberto rescued this lamp 45 years later.

Marset, acting as a bridge in time, took the original design —an octagon with overlapping sheets— and updated it by giving it a dual skin: cherry wood on the outside of the sheets and a white colour inside to enhance the light quality. The measurements are the same as the original’s —45 cm— and the interior structure, which was originally made of iron, is now polycarbonate, which makes it lighter. Through the use of wood, the MVV yields an exceptionally warm light.

An understated, rational and eminently geometric lamp —the MVV is like a construction site, in which the direct, down-facing light is complemented by indirect light that filters through the sheets. A design that, though timeless, reflects the constructive logic of that period and evokes a great many memories. 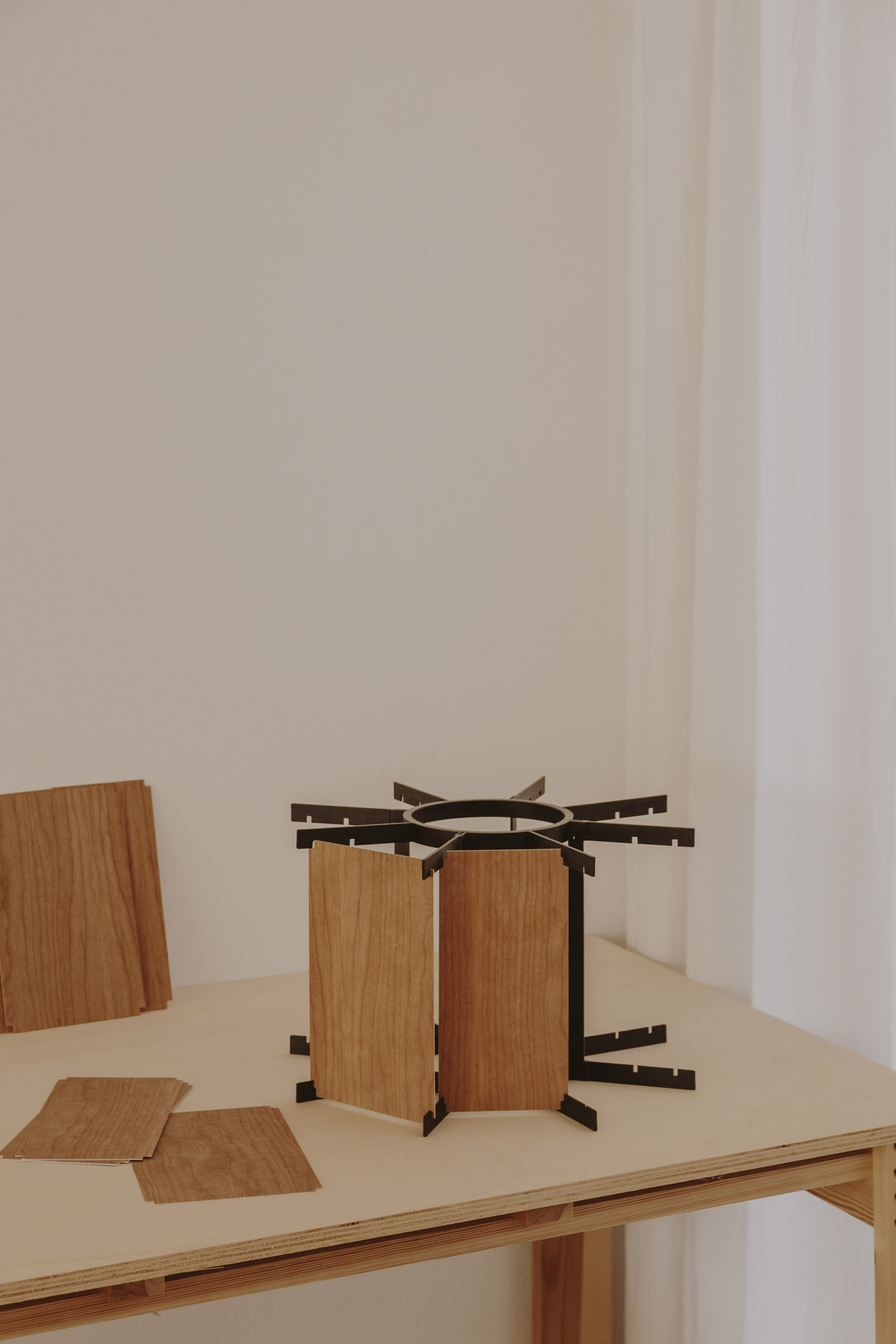 A minibar inspired by a cake cover, when oppened it generates expectation and surprise. This contributes a value added to...

Bread has been a basic, staple food for centuries all over the world and in every culture. In traditional Catalan...

The project consists of a collection of Borosilicate blown and non-blown glass pieces, which together create complex structures. The blown...