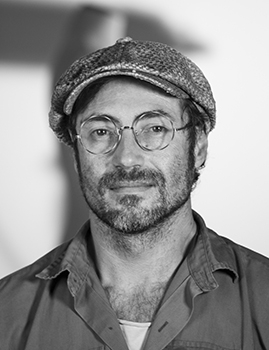 Industrial designer. ESDI (Escola Superior de Disseny) URL. Founder of Biscuits BCN in 2010. Designs and develops projects for food design, lighting, footwear, furniture, POS and facilities and events. He combines his work as a designer with teaching, teaching project classes at ESDI (Sabadell), Escola d’Art de Terrassa and IED (European Institute of Design). Workshop manager in projects for: Derbi, Mini, Zara, among others. All of them awarded.

Workshop assistant in European schools: Esad-Reims 2006, Campus Guia 2007, Viala (Bulgaria 2011). In 2001 he obtained a special mention in the ADI Fad Designer awards, in 2013 Grandma’s Food Design contest winner (Brussels) and in 2019 winner of Granini’s Sustainable Award. Freelance designer for projects with Loreal, Calvin Klein, Salomon, Fossil and Carolina Herrera among others, in the field of commercial furniture and POS. In 2002 he joined the R&D team at Camper, where he designs and develops the Wabi. In 2004 he designed the RGB lamp for LightLed, installed in the Torre Agbar (BCN) Led Technology.

Bread as a material or ingredient to sculpt objects. This project begins from the idea of translation normal bread to bones or parts of the human body. Psychological aspects change our perception and experience of eating.

Get to know the professional better by checking his website biscuitsbcn.com

Take your lunch wherever you go!&nbsp;Perfect for on-the-go lifestyle. Resistant, flexible and versatile bag.&nbsp;It adapts to its contents; it is...